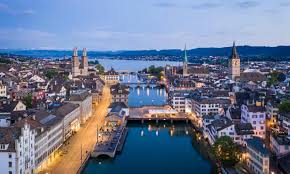 Most Swiss universities offer on campus student accommodation which is offered at a subsidized rate to international students.

Some international students prefer to rent a room in the house of a Swiss family, to truly experience the Swiss culture and integrate with the Swiss people.

Most higher education institutions in Switzerland will have a Housing Office or an International Office that can give more information about housing options.

Cost of Living in Switzerland

A student’s monthly budget comes to approximately CHF 1,500. The cost of living changes from the city to city; it will be expensive in Zurich and Geneva but a bit cheaper in other cities. Yearly university accommodation estimates to be around CHF 3,500, (CHF 7,800 for a studio and CHF 11,000 for a private studio).

Food and other utilities total upto CHF 800 – 850, and transportation approximately CHF 2.20 per ticket. Students must keep in mind that payments like Health Insurance, 1st semester tuition fees are due simultaneously at the beginning of their studies along with first rent payment which often includes a security deposit. As such, students can anticipate a minimum cost of CHF 16,000 -24,000 per year, depending on where they study.

Switzerland is a multilingual country with four official languages – Swiss German (nearly 70% of the indigenous population), French, Italian and Romansh.

Most people can at least read Swiss German. As many Swiss speak at least two of the official languages plus English, they have to be viewed as one of the great multilingual nations of the world.

It is expected and respected that people in Switzerland will speak their minds, without feeling the need to express any uncomfortable messages in a softer way in order to spare the feelings of the audience.

People tend to be discreet to speak about personal issues to new contacts, preferring to keep communication on a strictly business. There is little small talk prior to starting a meeting and people will try to express themselves briefly and without dramatic details.

Share
51 / 52
Need Help? Chat with us
Start a Conversation
Hi! Click one of our member below to chat on WhatsApp
The team typically replies in a few minutes.
International Educations
Customer Support