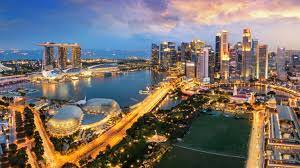 Singapore is a multi-cultural society where Malay, Chinese and Indian traditions coexist along with the western cosmopolitan outlook. People living in Singapore often come from diverse cultural backgrounds, making for a multi-ethnic society. According to the Asian cultural norms, older people are treated with respect. However, nowadays wealth and status are considered more important than age distinctions. A social superior or an authority is treated with formality and respect.

Singaporeans claim they are an egalitarian society like the western countries, yet they have strong hierarchical relationships like those between parents and children, teachers and students, and employers and employees.

Coming to the transportation, the public transport in Singapore is very much efficient and reliable. Its has been voted the second best in the world by expats.

Singapore’s weather is warm and humid, ranging from an average of 31°C during the day and 24°C at night. It rains throughout the year with heavier rain during the monsoon season, which lasts from November to January.

Singapore has a well-deserved reputation for being safe and relatively crime-free. Major crimes like murder and rape, are dealt with severely and swiftly. For at least the fifth year running, Singaporeans feel safer than residents of any other place in the world, a global study has found. The government has also made it known that extremism originating from religion or race has no place in Singapore, and it will not hesitate to act against any extremists or terrorist groups or individuals.

Singapore is a very spick and span island state and has also earned the nickname of “fine city”! And despite being a completely urbanized state, Singapore is the greenest city in Asia.

Ranked by the World Bank in 2016 as the easiest country to do business with, Singapore continues to attract investors and companies thanks to its “business- friendly” nature. The Singaporean economy is known as one of the freest, most innovative, most competitive, and most dynamic economy. It is no wonder that most multinational corporate giants of the world have their presence in Singapore. There are more than 7,000 multinational corporations from the United States, Japan, and Europe in Singapore. Singapore attracts a large amount of foreign investment as a result of its location, skilled workforce, low tax rates, advanced infrastructure and zero-tolerance against corruption.

In short, there won’t be any dearth of jobs in this country, which is quite a good reason for students to consider pursuing their higher education in Singapore. It traditionally has one of the lowest unemployment rates among developed countries. The unemployment rate did not exceed 4% from 2005 to 2014 Though physically small, Singapore is an economic giant. It has been Southeast Asia’s most modern city for over a century.

Singapore, the ‘’Lion City’’ is known for its economy and financial success.

Universities in Singapore are known all over the world for being an effective mix between the U.S and the U.K education systems. A Bachelor’s degree from a Singaporean university can massively increase your chances of getting better jobs. Even though Singapore is geographically small, there are a lot of jobs available for international students.

The following industries are currently booming in the country – Manufacturing, Construction, Tourism and Retail, Hospitality, Healthcare and Finance Information Communications and Digital Media.

Singapore’s education system is very strong and expects the best results for all the student hence, they do not allow students to do part time work while studying and focus only on Education.

Once a student graduates, they will not be able to stay or work in Singapore based on Student’sPass.

They must apply for a work – visa (pass) to continue to stay and work in Singapore.

The city ranks highly in numerous international rankings, and has been recognized as the most “technology-ready” nation.

Share
49 / 52
Need Help? Chat with us
Start a Conversation
Hi! Click one of our member below to chat on WhatsApp
The team typically replies in a few minutes.
International Educations
Customer Support