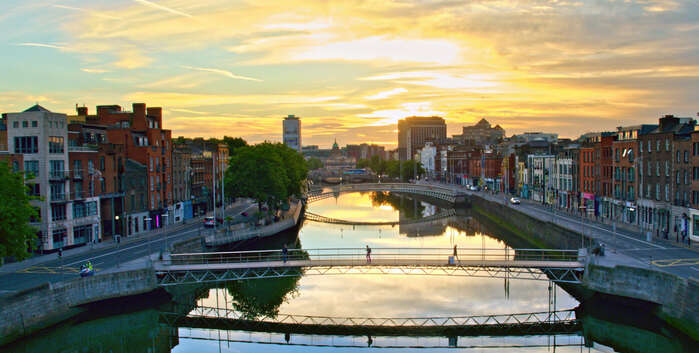 Ireland is situated in the Atlantic Ocean and separated from Great Britain by the Irish Sea. Half the size of Arkansas, it occupies the entire island except for the six counties that make up Northern Ireland

Ireland’s climate is influenced most by the Atlantic Ocean. April is the driest month generally, but in many southern parts June is the driest. July is the hottest month in Dublin with an average temperature of 16°C (60°F) and the coldest is January at 5°C (41°F) with the most daily sunshine hours at 6.3 in May.

The wettest month is August with an average of 80mm of rain. In winter, Ireland rarely sees snow, as winters here are usually mild. In the mountains, snow is not uncommon. Summers in Ireland are not extreme either. It is unusual for the temperature to rise above 20 or 25 °C. June and July are the warmest and sunniest months.

Banking and Currency In Ireland

Bank of Ireland banknotes features the Bank of Ireland logo, below which is a line of heraldic shields each representing one of the six counties of Northern Ireland.

In the Republic of Ireland, the official currency is the euro. One euro consists of 100 cent.

The Irish Culture has many different meanings. Ireland is often called the ‘land of saints and scholars’ referring to the golden age of monastic learning, or ‘the emerald isle’ referring to the green landscape. Ireland is very similar to many other Western countries in terms of TV, cinema and popular music and literature. However, one aspect of popular culture in Ireland that makes it somewhat different to other cultures is pub culture.

Ireland is famous for its music, folk dancing, verdant landscape, and production of beer and whiskey. Another notable source of Ireland’s fame is its rich mythological tradition. Some of the well-known celebrities who has their house in Ireland are: Ronnie Wood, Sarah Jessica Parker and Matthew Broderick etc.

Share
45 / 52
Need Help? Chat with us
Start a Conversation
Hi! Click one of our member below to chat on WhatsApp
The team typically replies in a few minutes.
International Educations
Customer Support