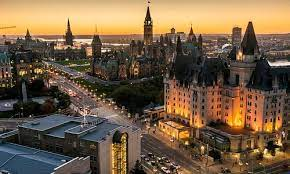 You will find this section a useful guide to living in the Canada throughout your stay in Canada. It explains everything from the basics, such the Canada Climate, Banking system etc. It also includes tips on how to stay Safe and Secure.

Students may choose to accommodate/live either on or off campus while studying in a college/university in Canada. Hence there are several kinds of accommodation available.

Accommodation provided by the school/college enrolled in:

Though the $1 and $2 coins have been around for the last 10 years, you will still sometimes come across bills of $1 &amp; $2. These are still legal tender but now getting scarce as collector items. Each bill is of a different colour and hence easy to differentiate especially for the new arrivals in the country.

Canada encompasses a large body of both land and water; hence the climate varies every few hundred miles. The southern belt of British Columbia, Alberta, Saskatchewan, Ontario and Manitoba is known for moderate temperatures and milder days in the summer months of June, July and August interspersed with thunder storms. Come September-October autumn makes its appearance with frost and December more often than not is snowy. Further up north in the Northwest Territories, Nunavut and the Yukon, weather is more severe, requiring the use of a light weight jacket in summer and warmer clothes the rest of the year round.

With modern technology having advanced and penetrated even the deepest territories, the ambience indoors of a typical Canadian home is kept fairly stable, with most modern housing and transportation being equipped with air conditioning and heating systems.

High Standard Of Living In Canada

In recent years, the standard of living of the average Canadian has gone up by leaps and bounds. Post World War II, Canada was considered the 2nd wealthiest industrialized country in the world.

Canada has a large amount of natural resources in the form of lakes and mineral deposits making it one of the richest countries existing today. With a population that is small, well educated and modernized, it has not taken long for the average Canadian to improve his lifestyle.

A record number of Canadians own their own homes today. Most homes are equipped with all modern amenities and machines and most Canadian families own a car if not two.

Canada is a melting pot of various cultures. It has migrants from all over the world who lend their cultural hues to the country whilst retaining their individuality. You will see this present in the vibrant range of cuisines and various clubs and associations of different communities.

All major cites have a variety of amenities that help a student adjust to the new country – Shopping malls, entertainment in the form of theatres, restaurants, art galleries, museums and several parks where many cultural events are held during the warm weather. Winter too has its own kind of charm with ice skating and other winter sports being pursued.

Although it is a good idea never to let down your guard when you are in a foreign country, Canada offers an international student one of the safest environments to study in. This is because it has a relevantly low crime and violence rate compared to some other nations.

In fact its crime rate has been on the decline in the last two decades and is at its lowest since 1973. This is partly because the Government and its judicial and security system are vigilant and tough on criminals.

Another contributing factor may be that the standard of living continues to go higher. As the locals lead a better life in terms of having their basic needs as well as comforts catered to, there is less likelihood of crime increasing.

Canada’s Science, Technology and Innovation Council report states that Canada has a sound base and what it takes to take the country forward through Innovation Leadership. Cutting edge Research Work being undertaken in several Canadian Universities will help enhance Canada’s potential in leading the way in fields of technology and innovation.

Canada is on par with the use of latest techno-gadgets especially in the field of wireless communication- both the use of CDMA and GSM based technology as well as 2.5 and 3G mobile technology. The country is ranked 14th as per 2016 updates in the ‘Networked Readiness Index’ only 3 places behind US. Top 10 of the Most High Tech Countries in the World- Canada ranks 8 th in the world as per 2016 update.

Canada has two official languages – English and French. Though a bilingual country, the large majority of the staunch French speaking population is found in Quebec, with a few scattered communities around the rest of the country. A whopping 83% of Quebecers speak French at home and are proud of it!

As a bilingual nation, Canada also offers superior English as a Second Language (ESL) and French as Second Language (FSL), training for students wishing to learn either or both languages. It is estimated that some 800 million people speak English and 250 million speak French

Share
50 / 52
Need Help? Chat with us
Start a Conversation
Hi! Click one of our member below to chat on WhatsApp
The team typically replies in a few minutes.
International Educations
Customer Support